Last month, Lee Matthew Goldberg’s latest book, THE ANCESTOR was published. I’m so happy to be participating in the blog tour for this book and am excited to be able to host a giveaway for this book. Read my review and see below for details on the giveaway!!! 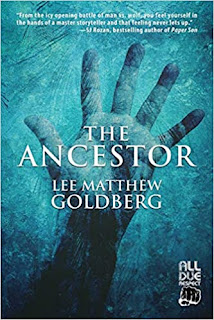 A man wakes up in present-day Alaskan wilderness with no idea who he
is, nothing on him save an empty journal with the date 1898 and a
mirror. He sees another man hunting nearby, astounded that they look
exactly alike except for his own beard. After following this other man
home, he witnesses a wife and child that brings forth a rush of memories
of his own wife and child, except he’s certain they do not exist in
modern times—but from his life in the late 1800s.

After recalling his name is Wyatt, he worms his way into his
doppelganger Travis Barlow’s life. Memories become unearthed the more
time he spends, making him believe that he’d been frozen after coming to
Alaska during the Gold Rush and that Travis is his great-great
grandson. Wyatt is certain gold still exists in the area and finding it
with Travis will ingratiate himself to the family, especially with
Travis’s wife Callie, once Wyatt falls in love. This turns into a
dangerous obsession affecting the Barlows and everyone in their small
town, since Wyatt can’t be tamed until he also discovers the meaning of
why he was able to be preserved on ice for over a century.

A meditation on love lost and unfulfilled dreams, The Ancestor
is a thrilling page-turner in present day Alaska and a historical
adventure about the perilous Gold Rush expeditions where prospectors
left behind their lives for the promise of hope and a better future.

The question remains whether it was all worth the sacrifice…

My thoughts: I have to say, this book was a little out of my comfort zone, yet I was totally intrigued by the premise. The cover absolutely pulled me in and I found that while time travel is not my typical type of read, I actually enjoyed this one.

I love books set in Alaska and Lee Matthew Goldberg definitely knows how to set the scene, making you feel like you are right there in the cold along with his characters. I got such a strong sense of place while reading this and that always adds such an unique layer to the story. As for the time travel part, this really amped up the thriller/suspense part of the book because I had no idea where it was heading. Combining family saga with the time travel, but adding in family drama, greed, small town life, acceptance and a slew of other issues, this book really kept my interest and I found that I kept coming up with ideas as to where I thought things might end up only to fall short every time. But that’s okay because this book really kept me thinking and I loved that!

While I didn’t love all the characters, I loved that they were all realistic. I loved the relationships and how they were portrayed. Ever so slowly the layers were peeled back to reveal just who Wyatt was both to us the reader and to Travis, and while I sometimes wished this happened a bit quicker, in the end, I think the timing was just right.

This book really took me by surprise and I’m so glad I agreed to read it. The writing is perfectly matched for the frozen Alaskan landscape – crisp and stark. It doesn’t get overly wordly and is at times quite gritty, but it matches the story it tells and works quite well. This is the first book I’ve read by this author and I definitely want to check out his other books, especially if they are anything like this. 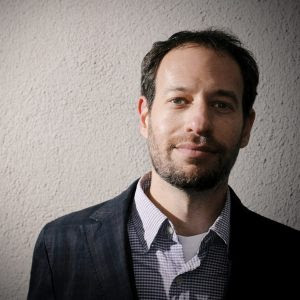 About the author: Lee Matthew Goldberg is the author of THE DESIRE CARD, SLOW DOWN and THE
MENTOR from St. Martin’s Press. He has been published in multiple
languages and nominated for the 2018 Prix du Polar. The second novel in
The Desire Card series, PREY NO MORE, is forthcoming. THE ANCESTOR will
be out from All Due Respect books in 2020 along with a reissue of his
debut novel. His pilots and screenplays have been finalists in Script
Pipeline, Book Pipeline, Stage 32, We Screenplay, the New York
Screenplay, Screencraft, and the Hollywood Screenplay contests. After
graduating with an MFA from the New School, his writing has also
appeared in the anthology DIRTY BOULEVARD, The Millions, The Montreal
Review, The Adirondack Review, Essays & Fictions, The New Plains
Review, and others. He is the co-curator of The Guerrilla Lit Reading
Series (guerrillalit.wordpress.com). He lives in New York City.

Be sure to check out all the other stops on the blog tour and follow the tour on Twitter (hashtags:  #TLCBookTours & #theancestor).


Giveaway Details — (US  only) Thanks to the publisher, one reader will win a copy of The Ancestor by Lee Matthew Goldberg.