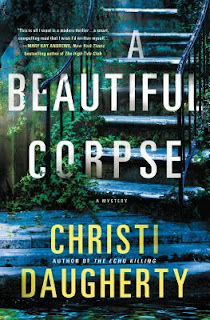 For a woman, being killed by someone who claims to love her is the most ordinary murder of all.

With
its antebellum houses and ancient oak trees draped in a veil of Spanish
moss, Savannah’s graceful downtown is famous around the world. When a
woman is killed in the heart of that affluent district, the shock is
felt throughout the city. But for crime reporter Harper McClain, this
story is personal. The corpse has a familiar face.

Only
twenty-four years old, Naomi Scott was just getting started. A law
student, tending bar to make ends meet, she wanted to change the world.
Instead, her life ended in the dead of night at the hands of an unseen
gunman. There are no witnesses to the crime. The police have three
suspects: Scott’s boyfriend, who has a criminal past he claims he’s put
behind him, her boss, who stalked another young bartender two years ago,
and the district attorney’s son, who Naomi dated until their
relationship ended in acrimony. All three men claim to love her. Could
one of them be her killer?

With the whole city demanding answers,
Harper unravels a tangled story of obsession and jealousy. But the
pressures on her go beyond the murder. The newspaper is facing more
layoffs. Her boss fears both their jobs are on the line. And Harper
begins to realize that someone is watching her every move. Someone
familiar and very dangerous.

Someone who told her to run before it’s too late…

My thoughts: This is the second book in Christi Daugherty’s Harper McClain series and I am totally hooked. I loved the first book, The Echo Killing and immediately went out and bought the next two books. And this second one is just as good!

I loved how fast-paced and atmospheric this book was. It is a follow-up to the first book, and while it certainly can be read on its own, there are some threads that are continued from the first book that pertain to Harper and her past. If you haven’t read that first book yet, you certainly will be itching to after reading this one.

I love Harper McClain. I love how determined she is to get justice for the murdered victim, even when she has little help from the police. She’s such a flawed character, yet she’s dogged in her search for answers. I wanted answers to this murder as much as she did and found myself trying to figure this one out right alongside her.

I also love how her past continues to be front and center in this series. This is why I love reading series and why I am such a firm believer in reading them in order whenever possible – that continued character development. In this second installment things are still building around what happened to Harper’s mother, someone is still watching her and with all this happening to her, the tension grows. Who is it and why are they targeting her?

I loved this latest installment and I cannot wait to start the next one, especially with this one ending with a bit of a cliffhanger. I’m not sure if book 3 is the end of the series or if there will be more books after that but I cannot recommend this series enough. They are so engaging and addicting!