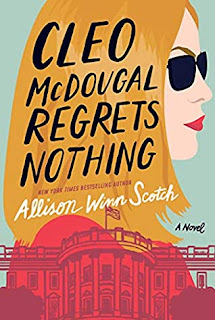 Summary:
Politics is a test of wills in a sharp, funny, and emotional novel about truth and consequences by the New York Times bestselling author.

Cleo
McDougal is a born politician. From congresswoman to senator, the
magnetic, ambitious single mother now has her eye on the White
House—always looking forward, never back. Until an estranged childhood
friend shreds her in an op-ed hit piece gone viral.

With seven
words—“Cleo McDougal is not a good person”—the presidential hopeful has
gone from in control to damage control, and not just in Washington but
in life.

Enter Cleo’s “regrets list” of 233 and counting. Her
chief of staff has a brilliant idea: pick the top ten, make amends
during a media blitz, and repair her reputation. But there are regrets,
and there are regrets: like her broken relationship with her
sister, her affair with a law school professor…and the regret too big to
even say out loud.

But with risk comes reward, and as Cleo makes
both peace and amends with her past, she becomes more empowered than
ever to tackle her career, confront the hypocrites out to destroy her,
and open her heart to what matters most—one regret at a time.

My thoughts: I’ve read a few of Allison Winn Scotch’s books and was excited to have been given the opportunity to read her latest. This was an unexpected delight.

This is a smart, savvy book that will give you lots of food for thought. I don’t tend to read a lot of political books or really any books that touch on that topic. It really is more that Cleo is running for President and has major damage control after an op-ed piece comes out stating she is not a good person. That becomes the basis for her deciding to take her list of 233 regrets to task.

I liked that this book is so much more than just a fluffy women’s fiction piece. It would make a great book club selection as there is so much here to discuss. There are relationship issues, gender roles, women empowerment, and so on. The cover is a little deceiving as it may lead you to think this is a light, fluffy read but it is anything but. I definitely recommend picking this one up…it may just surprise you!