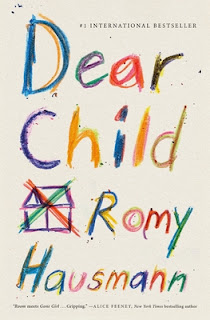 A woman held captive finally escapes – but can she ever really get away?

A
windowless shack in the woods. A dash to safety. But when a woman
finally escapes her captor, the end of the story is only the beginning
of her nightmare.

She says her name is Lena. Lena, who
disappeared without a trace 14 years prior. She fits the profile. She
has the distinctive scar. But her family swears that she isn’t their
Lena.

The little girl who escaped the woods with her knows things
she isn’t sharing, and Lena’s devastated father is trying to piece
together details that don’t quite fit. Lena is desperate to begin again,
but something tells her that her tormentor still wants to get back what
belongs to him…and that she may not be able to truly escape until the
whole truth about what happened in the woods finally emerges.

Twisty, suspenseful, and psychologically clever, Romy Hausmann’s Dear Child is a captivating thriller with all the ingredients of a breakout hit.

My thoughts: If you think you know this story because you’ve read Emma Donoghue’s Room, think again. This one is not the same and I’m so glad I read it. Yes, it’s dark and disturbing, but as crazy as it sounds, I really loved every second of it. This was such a brilliant book and as a debut novel, I am so excited to see what comes next from this talented author!

It’s hard to write this review without giving too much away, but I will say that I am always intrigued by captivity plots. I’m not sure why and this one captivated me from start to finish. The twists and turns kept me guessing all the way through. Each time I thought I had worked out where things were heading, something else pops up to turn things around. Nothing is as it seems in this book. It’s creepy and dark and really gets under your skin.

This book moves fast, but it really is character driven. It alternates between three points of view and as we move from character to character, we learn just a little bit more about what really happened in the cabin. It’s not a very graphic book, but rather we are left to infer what happened – I loved the way the author did this.

I really liked this book and will definitely be adding Romy Hausmann to my list to must-read authors.

Audio thoughts: This was a great audio and I this all three narrators did a great job with the narration. The pacing and intonation were spot on and they really brought the story to life, infusing just the right amount of tension and suspense into their voices as needed.