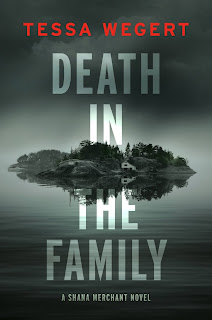 Summary:
A storm-struck island. A
blood-soaked bed. A missing man. Senior Investigator Shana Merchant
believes it all adds up to a killer in their midst—and that murder is a
family affair.

But
as a nor’easter bears down on her new territory, Shana and fellow
investigator Tim Wellington receive a call about a man missing on a
private island. Shana and Tim travel to the isolated island owned by the
wealthy Sinclair family to question the witnesses. They arrive to find
blood on the scene and a house full of Sinclair family and friends on
edge.

While Tim guesses they’re dealing with a runaway case,
Shana is convinced that they have a murder on their hands. As the gale
intensifies outside, she starts conducting interviews and discovers the
Sinclairs and their guests are crawling with dark and dangerous secrets.

Trapped on the island by the raging storm with only Tim whose
reliability is thrown into question, the increasingly restless suspects,
and her own trauma-fueled flashbacks for company, Shana will have to
trust the one person her abduction destroyed her faith in—herself. But
time is ticking down, because if Shana’s right, a killer is in their
midst and as the pressure mounts, so do the odds that they’ll strike
again.

My thoughts: This is the first book in Tessa Wegert’s Shana Merchant mystery series and as I am going to be on tour for the second book, which comes out in December, I of course needed to make sure I read the first one. I always prefer reading series in order whenever I can and somehow I missed this one when it came out earlier this year.

I really enjoyed this book and am glad that I had the opportunity to read it before jumping into the second one. I think it’s the perfect introduction to what I feel is going to be a great series – and we all know how much I love my series!!! One thing I find in series openers is that sometimes authors spend a lot of time setting things up and not giving us any movement, but I thing Tessa Wegert did a great job of jumping into action while still introducing us to our main characters. I think we got a good feel for Shana Merchant, but we’ve only scratched the surface. I’m looking forward to exploring more of her character as the series continues.

I am always a fan of the “locked-room” style mysteries and that is what we have here in this book. It was so atmospheric and at times a bit claustrophobic and I think that only added to the overall tension and suspense of the story. Also adding to the mystery was the fact that each family member had their own secrets – another layer that I loved. It just made this book so addicting and captivating.

There are quite a few moving parts to this book and the one thread involving Shana’s past is one that will be continued at least in the next book as there was no resolution here. I love having that one thread carry over and this is why I’m so glad I picked up this book before reading the upcoming second book. I love when an author has that one thread that carries over into subsequent books. I’m eager to see where that leads.


Audio thoughts: I grabbed this audio from the library – loved the hoopla app – because I wanted to make sure I could fit it in before I needed to read the second book in this series. I thought it was a good audio and the narrator, Callie Beaulieu was a new narrator to me. Her pacing and intonation were good and I felt she gave each character their own unique voice.