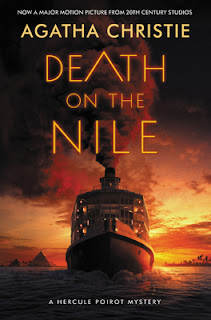 Summary:
SOON TO BE A MAJOR MOTION PICTURE RELEASING OCTOBER 9, 2020 —DIRECTED BY AND STARRING KENNETH BRANAGH

Following the success of Murder on the Orient Express, Kenneth
Branagh returns to direct and star in this adaptation of the classic
Hercule Poirot mystery for the big screen, also starring Gal Gadot.

Beloved detective Hercule Poirot embarks on a journey to Egypt in one of Agatha Christie’s most famous mysteries, Death on the Nile.

The
tranquility of a cruise along the Nile was shattered by the discovery
that Linnet Ridgeway had been shot through the head. She was young,
stylish, and beautiful. A girl who had everything . . . until she lost
her life.

Hercule Poirot recalled an earlier outburst by a fellow
passenger: “I’d like to put my dear little pistol against her head and
just press the trigger.” Yet in this exotic setting nothing is ever
quite what it seems.

My thoughts: I know I am rather late to the Agatha Christie game, but I have to say that I am loving reading these now, later in life. And big surprise I am not reading these in order which if you know me and my reading preferences when it comes to series, is quite unusual. But I feel that it’s not really necessary.

I recently read a fantastic book about the time that Agatha Christie went missing, called The Mystery of Mrs. Christie by Marie Benedict, which is out now. In the book, Benedict actually covers the trip that Christie took that is the basis for this novel. It was quite fascinating to read about that trip and than read this book.

I really have come to love Hercule Poirot and this book was just pure fun! Knowing that it was partly inspired based on Christie’s own life experiences made for an exciting read, especially knowing even more about the author herself. There are always so many suspects, each of them having a motive, and I love trying to figure things out, though I have yet to do so before we are given the answer. I really do love locked-room mysteries and this time, being on a ship was such a great concept. There was literally no where to go!

I am definitely excited to see this movie and I know I will certainly be rereading this book at some point – maybe I’ll eventually read this series in order one day! Have you read this series? I haven’t read any of Agatha Christie’s other series, just a few books in this series and am excited to know I have a bunch more ahead of me!