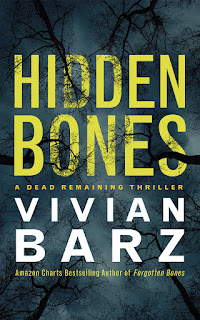 
Two months have passed, and the horrors of Death Farm still
torment police officer Susan Marlan and college professor Eric Evans.
Susan struggles to regain her zeal for fighting crime, while Eric is
slowly coming to terms with his newfound “gift” of seeing the dead.

Seeking
much-needed rest, Susan and Eric follow their musician friend Jake and
his band to Washington State. But once they reach the cheerless town of
Clancy, Eric’s murderous visions start again. Something seems wrong
about the town and its aloof citizens—and suspicions turn to dread when
members of Jake’s band go missing.

Eric, Susan, and Jake search
deep in the dark forest of the Olympic Peninsula, where many have
disappeared. But the harder they search, the less cooperative the locals
become. As the case begins looking more like a murder investigation,
the trio must work together to locate the lost and uncover chilling town
secrets buried in the darkest of places.


My thoughts: This is the second book in Vivian Barz’ Dead Remaining series and I really like this series. It’s atmospheric, creepy and a great installment to what is becoming a favorite series.

While this book does work on it’s own, I really suggest you read the first book in this series, Forgotten Bones, before picking this one up. It will help you to get a better feel for the main characters and the dynamics of their relationships. Of course, Vivian Barz does give a little backstory here in this second book so that if you have read the prior one you won’t be totally lost, but there were enough times that events were mentioned from the first book that I’m glad I had already read it.


This second book picks up about two months after the first one leaves off and Eric and Susan are still struggling with all the have happened. Susan has attempted to go back to work, but she might not have it in her anymore or at least not right now. Eric is still trying to get used to his new gift. As timing goes, Jake, an old student of Eric’s reaches out and they head out of town with him and his band but unfortunately, rest and relaxation is not exactly in the cards.


One of the reasons I love this series is because it’s such a good mix of thriller, mystery, police procedural with a little bit of paranormal thrown in. I also loved the small-town setting. It seemed odd right from the get-go, which added to the overall creepiness of the book and the townsfolk that Eric, Susan and Jake and their friends meet just seem off, which only heightened my suspicions, especially when their friends go missing. These townsfolk are hiding something and are either part of the problem or too scared to say what the problem is.


I loved all the twists and turns this book took. It moves along at a fairly good pace and I loved seeing how Eric and Susan handled things, especially after the last time. There has definitely been some growth in our characters and this is why I love reading series – seeing how our characters change over time.

I cannot wait to see what book three, Campus Bones, brings for our characters. I do hope that Jake continues to be part of this series as he is such a fun character and brings a little comedic break to the heaviness that tend to follow Eric and Susan.


Audio thoughts: I was so glad to see that Julie McKay was narrating this second book. I am such a fan of consistency when it comes to narrators of series, whenever possible, and loved that she was back for book 2! I thought she did a great job with this second book, bringing the same voices back again as she had from the first book, which makes it so easy to jump right back in. Her intonation and pacing was spot on and she really does bring this book to life. I do hope she is back for book three!