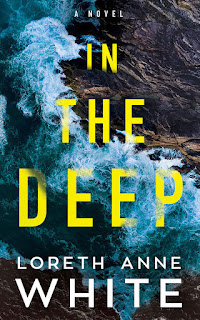 I hope you don’t find him. And if you do, I hope he’s dead and that he suffered…

Real-estate mogul Martin Cresswell-Smith is the best thing
that has ever happened to Ellie. After her daughter’s devastating death,
a divorce, and an emotional breakdown, he’s helped her move as far as
possible from the grief, the rage, and the monsters of her past. Ellie
imagines her new home with Martin in an Australian coastal town will be
like living a fairy tale. But behind closed doors is another story—one
that ends in Martin’s brutal murder. And Ellie seems almost relieved…

Senior
Constable Lozza Bianchi has reasonable doubt. She sees evidence of a
twisted psychological battle and a couple who seemed to bring out the
worst in each other—adultery, abuse, betrayal, and revenge. If anything
Ellie says can be believed, that is. As the case takes twist after
spiraling twist, Lozza can’t shake the gut instinct that she’s being
manipulated. That Ellie is hiding something. That there are secrets yet
to surface. Lozza has no idea.

My thoughts:  This is the first book I’ve read by Loreth Anne White but it certainly will not be the last. I have no idea how I have not read anything by her before…her writing is insanely good!

This book kept me engaged and glued to the pages from start to finish…I love books like that. And it also had so many little twists and turns that I did not see coming. It was so tense and suspenseful and really kept me guessing as to how things were going to play out. I thought a few times I had things worked out, but nope! Not even close. That’s how twisted and clever this author is.

I loved how it was written, alternating between the present at the trial for the murder of Martin Cresswell-Smith and then the past, and using multiple POV’s to tell the story. It really keeps you on your toes as you try to figure out just what the heck happened. And the settings…talk about vivid imagery and an absolute atmospheric read. Most of the book takes place in New South Wales in Australia, somewhere I have never been, but I felt like I was there right along with the characters – that’s how descriptive the author was, but never too wordy that it gets bogged down.

I will definitely be checking out Loreth Anne White’s backlist now that I’ve devoured this one…I cannot believe I haven’t read anything by her before. Have you? Where do you recommend I start if you have? And definitely pick this one up!