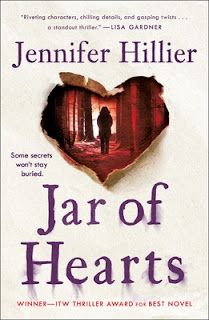 Summary:
This is the story of
three best friends: one who was murdered, one who went to prison, and
one who’s been searching for the truth all these years . . .

When
she was sixteen years old, Angela Wong–one of the most popular girls
in school–disappeared without a trace. Nobody ever suspected that her
best friend, Georgina Shaw, now an executive and rising star at her
Seattle pharmaceutical company, was involved in any way. Certainly not
Kaiser Brody, who was close with both girls back in high school.

But
fourteen years later, Angela Wong’s remains are discovered in the woods
near Geo’s childhood home. And Kaiser–now a detective with Seattle
PD–finally learns the truth: Angela was a victim of Calvin James. The
same Calvin James who murdered at least three other women.

To the
authorities, Calvin is a serial killer. But to Geo, he’s something else
entirely. Back in high school, Calvin was Geo’s first love. Turbulent
and often volatile, their relationship bordered on obsession from the
moment they met right up until the night Angela was killed.

While everyone thinks they finally
know the truth, there are dark secrets buried deep. And what happened
that fateful night is more complex and more chilling than anyone really
knows. Now the obsessive past catches up with the deadly present when
new bodies begin to turn up, killed in the exact same manner as Angela
Wong.

My thoughts: I read this book back when it first came out a few years back, but as it was selected for an online book club I participate in, I decided I wanted to reread it and I am so glad I did. I loved it the first time I read and I loved it even more this second time around.

This is absolutely a totally binge-worthy read, one that I found to be true the first time around, and that certainly held true again this time. Since I have read tons of books between then and now, there were little things I had forgotten, but the gist of the book all came back as soon as I started reading it.

This book is perfectly paced – I remember thinking that the first time around and I definitely felt that again during this second time. The tension rises at just the right moments and I felt the obsession and terror come through. This book plays on every emotion and goes for full shock value but it all works. Nothing is done without purpose. It pulled me in from the very beginning and never once let up.

I cannot recommend this book enough. It definitely goes down as one of my favorite books of all time and one that I will probably read again at some point – it is just brilliantly crafted.

My original review can be found here.