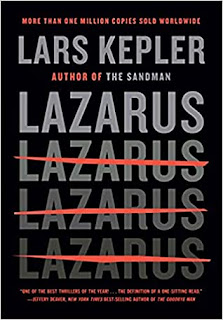 All
across Europe, the most ruthless criminals are suffering gruesome
deaths. At first, it seems coincidental that their underworld
affiliations are finally catching up to them. But when two of the
victims are found to have disturbing connections to Detective Joona
Linna, it becomes clear that there’s a single killer at work. Still,
police are reluctant to launch an investigation. If a mysterious
vigilante is making their jobs easier, why stand in his way? Joona,
however, is convinced this is no would-be hero. These deaths serve a much darker purpose.

Desperate
for help, Joona turns to Saga Bauer. If his hunch is correct, she’s one
of the few people who stands a chance at bringing this criminal
mastermind down. But Saga is fighting her own demons–and the killer
knows just how to use them to his advantage. He continues to strike with
impunity, and no one, it seems, is safe. When the killer begins
targeting those closest to Saga and Joona, it appears more and more
likely that Joona has been right all along, and that tracking down the
person responsible will force him to confront a ghost from his past . . .
the most terrifying villain he’s ever had to face.

My thoughts: This has become one of my favorite series, ever since reading book 4, The Sandman, which is the first book I read in this series.
These are the types of books that once you
start reading them, you find yourself completely consumed by them,
despite the fact that they are incredibly dark, haunting, and
disturbing. They are completely addicting and binge-worthy books and I find that I can think of nothing else once I am reading one.

I will say that if you are new to Lars Kepler, I would strongly suggest at least reading book 4, The Sandman, prior to reading this one. That’s not to say you could not read this one as a stand-alone because each book really is written as a self-contained story. But I think that you would have a much richer reading experience if you were to at least have read The Sandman if not all the books prior to this one.

I have been eagerly awaiting this book ever since I finished the last one with that cliffhanger ending. I knew something crazy was brewing for Joona Linna, but little did I know just how insane it would end up. When a string of murders start happening across Europe, no one has any idea that it will lead to where it does, least of all Joona but his entire world is about to be turned upside down and nothing is going to be the same again.

This is the type of book that absolutely gets under your skin. Not only because of the nature of what is going on, but also because if you have read the previous books, like I have, you most likely have developed a “relationship” with the characters and it’s hard not to get caught up in what they are going through. This book is one big cat and mouse game between a villain who has effectively risen from the dead and our two beloved detectives, Joona Linna and Saga Bauer. As this villain starts threatening their loved ones, they realize he needs to be stopped at all costs.

This
book, like most in this series, is incredibly dark and quite violent.
It’s gruesome and has enough twists and turns to keep you engaged and flipping the pages to see what is going to come next. I was on the edge of my seat
the entire time. And between the short chapters and the mini-cliffhangers at the end of some chapters, you find that you just need to keep reading. It really is that type of book that you just don’t
want to put down once you start reading it.

I cannot recommend this series enough. It is a fast-paced and complex story that totally delivers on every level. The tension remains high throughout and the final chapter will leave you once again eagerly counting down til the next book…and I have no idea when that will be. But I do know that at least there will be another one. In the meantime…grab this one -you won’t be disappointed!