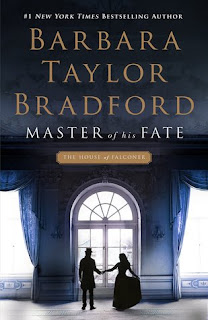 Victorian
England is a country of sharp divides between rich and poor, but James
Lionel Falconer is everything a self-made man should be: handsome,
ambitious, charming, and brimming with self-confidence. Even as a boy
working in his father’s market stall in Camden, he was determined to
become a merchant prince. Through hard work and a single-minded
determination, James rises quickly through the ranks, with a loving
wife, devoted children, and a lofty position in the Malvern &
Malvern Company. But when back-to-back tragedies strike the Falconer
home, shattering this idyllic life, it seems as though James might never
recover his former glory…until a royal summons gives him the chance
to prove that he truly is a master of the game.

The first book in
an expansive and intricately detailed new historical fiction series
from master storyteller Barbara Taylor Bradford, Master of the Game is filled with drama, intrigue, and Bradford’s trademark cast of compelling characters.

My thoughts: It’s no secret that I am a HUGE fan of Barbara Taylor Bradford’s saga’s. I first discovered her years ago when I read, and LOVED A Woman of Substance, which still remains one of my favorite books. I have since gone on to read that entire series and her subsequent series and was thrilled when I found out she was writing a new one. I have had this book sitting on my shelf for some time now, not quite sure why I didn’t read it as soon as it I got it, but now with the second book coming out next week, I knew I had to read this one first.

I love the characters and story that BTB is able to create. I am always able to get so swept up in their lives and this latest one is no exception. There is such rich detail and in this particular story we have such a clear distinction between the haves and the have-nots. The characters just jump off the pages and I immediately feel I am in their world, living right alongside them.

James Falconer and Alexis Malverne come from such different worlds, yet they are destined to meet. They both have been brought up in loving families and are taught much the same values, have strong father-figures and are strong, determined young people who know what they want. I loved seeing them find their way in the world, and I also enjoyed seeing all the family gatherings and details that we are privy to along the way.

I also loved how bits of history are included in this novel, including the Jack the Ripper story line. I loved that and am curious to see if we will circle round to that again or if it was just a one-off scene.

There are some major developments that occur for one of our characters and I am quite eager to see how these play out in the next book. While I love reading series, sometimes it works to my advantage waiting to read the books closer together. In this case, events are fresh in my mind and I am not waiting for the next book to be published to see what happens next.

Audio thoughts: This was a good audiobook and I thought Joan Walker did a great job with the narration. While I normally would have read the book, because I needed to get to it faster, I decided to listen to it, and I’m glad I did. Joan’s enthusiasm truly came through and she gave each character their own unique personality. Her pacing and intonation was spot on and she made this book a pleasure to listen to.