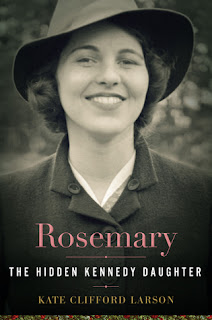 Summary:
They were the most prominent American family of the twentieth century. The daughter they secreted away made all the difference.

Joe and Rose Kennedy’s strikingly beautiful daughter Rosemary attended
exclusive schools, was presented as a debutante to the Queen of England,
and traveled the world with her high-spirited sisters. And yet,
Rosemary was intellectually disabled — a secret fiercely guarded by her
powerful and glamorous family.

Major new sources — Rose Kennedy’s
diaries and correspondence, school and doctors’ letters, and exclusive
family interviews — bring Rosemary alive as a girl adored but left far
behind by her competitive siblings. Kate Larson reveals both the
sensitive care Rose and Joe gave to Rosemary and then — as the family’s
standing reached an apex — the often desperate and duplicitous
arrangements the Kennedys made to keep her away from home as she became
increasingly intractable in her early twenties. Finally, Larson
illuminates Joe’s decision to have Rosemary lobotomized at age
twenty-three, and the family’s complicity in keeping the secret.

Rosemary delivers
a profoundly moving coda: JFK visited Rosemary for the first time while
campaigning in the Midwest; she had been living isolated in a Wisconsin
institution for nearly twenty years. Only then did the siblings
understand what had happened to Rosemary and bring her home for loving
family visits. It was a reckoning that inspired them to direct attention
to the plight of the disabled, transforming the lives of millions.

My thoughts: As soon as I heard about this book, I knew I had to read it and I’m so glad I finally did. While I knew a bit about Rosemary’s life, there was quite a lot contained in the book that I was not aware of and as hard as it was to read this book, it was also very informative.

I think what most comes to mind when thinking about Rosemary Kennedy is a lot of what ifs. What if they hadn’t waited on the doctor when Rosemary was about to be delivered? What if Jo Kennedy had listened to the research that Kick Kennedy had provided about lobotomies and not gone through with it on Rosemary? There is so much sadness when thinking about Rosemary yet there didn’t need to be. This family was a family that strove for perfection and perhaps if it focused on love and acceptance, we would have had a different story with a much better outcome.

I applaud Kate Clifford Larson for the research she put into this book to give us a detailed, yet readable account of Rosemary’s life. It is a heartbreaking story, no doubt, yet it is also one that, thanks to her siblings, is also one of hope.

Audio thoughts: Once again, I find that listening to nonfiction just works better for me, and even though this particular book was devastating to listen to at times, Bernadette Dunne did such a great job with the narration that I found myself completely captivated. I did alternate between the audio and the print as there are letters and pictures included, but I mostly listened.