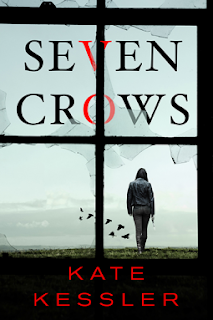 An ex-con tracks down the men who have kidnapped her niece in this gritty and visceral thriller.

Killian Delaney has a skewed moral compass, a high threshold
for pain, and has just been released from prison to discover that
someone has taken her niece.

Killian does not hesitate. Loyalty is the most important
thing in her life, and when she gets a call from her sister saying that
her daughter is missing, Killian immediately begins hunting down the men
responsible.

She quickly discovers her niece was involved with a notorious
biker gang who are engaged in everything from drugs to human
trafficking. And to make it worse, the man who sent Killian to jail, the
one she nearly beat to death, is at the center of it all.

To save her niece, she’ll need a plan. A smart, quick, and
efficient one. Because she’s going to do it right this time. She’ll burn
them to the ground.

My thoughts: I was recently asked to read Kate Kessler’s upcoming new release, Call of Vultures, which comes out December 1st. I was excited when the publisher offered to send me this book as well, which is the first of the Killian Delaney books…you know how I prefer reading series in order whenever possible.

This book starts off with a bang and never lets up and I loved the intensity of it. And Killian Delaney is one kick-a** main character that I know I am going to love reading about. She is an ex-con who is fiercely protective of those she loves and is so flawed and broken you can’t help but love her all the more for it. I loved the way the story was mostly told in the present, but would flash back to the past every now and again to fill in Killian’s backstory. It was such an effective way to help us get to know her better, without getting bogged down with too many details.

This story is fast-paced and is full of mystery, suspense and family drama all rolled into one. It’s dark and gritty, but has heart at the same time and I could not get enough of it. It is filled with some of the best characters I’ve read in a long time – some really good guys and some really awful, bad guys that you wouldn’t want to meet ever. I hope the good guys are ones we see again in future books.

There are some developments that happen regarding Killian personally that I will be curious to see how they play out in the next book. Secrets are revealed that were not meant to be and this has potential to stir things up. In addition, relationships are taken to new levels and of course that could be a good thing but it might not.

This is the type of book that totally consumes you because of both the nonstop action and the main character. I am excited to have found this book and am looking forward to reading the next book. Have you read this one yet?