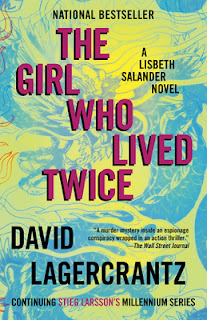 The sixth Lisbeth Salander story in the Millennium Series–the
crime-fiction phenomenon that has sold more than 90 million copies
worldwide.

Lisbeth Salander–the fierce, unstoppable girl with the
dragon tattoo–has disappeared. She’s sold her apartment in Stockholm.
She’s gone silent electronically. She’s told no one where she is.

Mikael
Blomkvist is trying to reach Lisbeth. He needs her help unraveling the
identity of a man who died with Blomkvist’s phone number in his
pocket–a man who does not exist in any official records and whose
garbled last words hinted at knowledge that would be dangerous to people
in the highest echelons of government and industry.

Once again,
Salander and Blomkvist will come to each other’s aid, moving in tandem
toward the truths they each seek. In the end, it will be Blomkvist–in a
moment of unimaginable self-sacrifice–who will make it possible for
Lisbeth to face the most important battle of her life, against her twin
sister Camilla, and, finally, to put her past to rest.

My thoughts: This is the sixth and final book in the Millennium series and I am so sad to see it come to an end. This is the series that got me into Nordic Noir and I will be forever grateful to Stieg Larsson for that. And while I had my trepidations with continuing the series once a new author came on the scene, I am glad I did. Lisbeth Salandar will forever be one of my favorite characters!

I do have to say, this is not my favorite book in the series. I liked it, but I was just hoping for a bit more of Lisbeth and I feel we didn’t get that. Yes, there was a very interesting storyline involving Lisbeth and her twin sister Camilla, but I feel there was a bit more time spent o the other storyline featuring the homeless guy that had Blomkvist’s number in his pocket when he was found dead.

Do I regret reading this one? No, not at all. But I cannot help but wonder had Larrson lived, what we would have been given for an ending to a series instead of this. And let’s not forget, Larsson’s original plan was for this series to have 9 or 10 books. I would have loved that!

It’s a good book and I’m glad I read it, but in all honesty this is probably not one I would reread. I would definitely reread the first three in the series because those ones are fantastic and that is the reason I fell in love with this series in the first place!


Audio thoughts: One
of my favorites aspects of this series has been that Simon Vance has
been the narrator for all the books, so even with the change in author,
there has been consistency with the narration. That has helped. Simon
Vance is phenomenal with these characters and the telling of this series
and his consistency over the course of these books has been amazing!

1.  The Girl With the Dragon Tattoo


6. The Girl Who Lived Twice