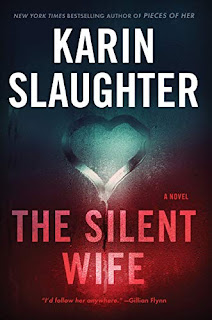 Summary:
Investigating the
killing of a prisoner during a riot inside a state penitentiary, GBI
investigator Will Trent is confronted with disturbing information. One
of the inmates claims that he is innocent of a brutal attack for which
he has always been the prime suspect. The man insists that he was framed
by a corrupt law enforcement team led by Jeffrey Tolliver and that the
real culprit is still out there—a serial killer who has systematically
been preying on women across the state for years. If Will reopens the
investigation and implicates the dead police officer with a hero’s
reputation of wrongdoing, the opportunistic convict is willing to
provide the information GBI needs about the riot murder.

Only
days ago, another young woman was viciously murdered in a state park in
northern Georgia. Is it a fluke, or could there be a serial killer on
the loose?

As Will Trent digs into both crimes it becomes clear
that he must solve the cold case in order to find the answer. Yet nearly
a decade has passed—time for memories to fade, witnesses to vanish,
evidence to disappear, and lies to become truth. But Will can’t crack
either mystery without the help of the one person he doesn’t want
involved: his girlfriend and Jeffrey Tolliver’s widow, medical examiner
Sara Linton.

When the past and present begin to collide, Will realizes that everything he values is at stake . . .

My thoughts: I have been a fan of Karin Slaughter for some time now, but I have only read her stand-alones. I have loved them immensely, despite how dark and disturbing they tend to be, so when I was offered the chance to read/listen to this latest one, I jumped at it. I didn’t realize at first that it was part of her series…a long-standing one at that. So, I did something that I am not really fond of doing, but have been doing more and more lately and that is jumping into a series midway.

While I always prefer starting a series at the beginning because I love getting all that character development, I know that it is not always possible, and as was the case here, time was not in my favor. On top of that, there is always the possibility that I might not like the series enough to even make it that far…I had book 10 and didn’t even own the earlier books. So, throwing caution to the wind, I jumped in. And I found that I wasn’t too lost. Most authors these days give just enough backstory to keep new readers engaged so that they understand what is going on and I felt I had a good handle on things. Do I want to go back to the beginning? ABSOLUTELY!!!

This story grabbed me from the beginning and never lets up. This book addresses violence against women and it’s gritty, creepy and raw. These books are not for the feint of heart. I loved the police procedural/detective aspect of the story and even the slight romance part kept it from staying too dark the entire time. The multiple points of view and having the story move and back in time kept the story moving and as it is quite a long book, this helps! I never once felt that this book dragged and that’s saying something – this book is close to 500 pages/over 18 hours of audio-time and I was totally captivated the entire time. I listened to the whole thing, but loved having the print book on hand as there were times I needed to go back to reference something or reread some section and it’s always so much easier to do that in the print book than in an audiobook.

This story is complex and I loved that I never once knew where things were headed. I also loved that as the story moved back and forth in time, we would be left with little hints as to what might come next. This really kept me engaged and I had such a hard time putting the book down. While I tried to put the pieces together, I never saw the end coming and that’s a good thing. I love being caught off guard. And this one completely shocked me in the best way possible.

I do not regret picking this book up mid-series. I enjoyed the story as I knew I would because I love Karin Slaughter’s writing. And now I know I have a series I am looking forward to going back to reading from the beginning. I am eager to really getting to know these characters on a deeper level and seeing how they all fit together.

But now I am in a bit of a quandry…I want to go back to the beginning…but what beginning? Do I start at the beginning of the Will Trent series or do I need to go back further to the Grant County series? If you’ve read these series…let me know what you suggest I do!

Audio thoughts: This audiobook was fantastic! I have found a new series to binge. I will absolutely be going back to the beginning and will certainly be listening and I can only hope that Kathleen Early is the narrator for this whole series. She does a phenomenal job with the voices, giving each character their own distinct voice and personality. I am such a stickler for consistency when it comes to narrators and series when possible and I really hope there is some consistency here. Her pacing and intonation was spot on and she infused just the right amount of emotion and tension into her voice as needed.