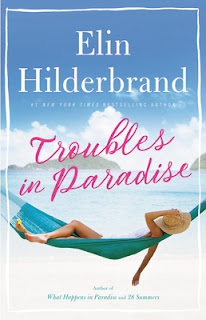 Summary:
Travel to the bright Caribbean one last time in the satisfying
conclusion to the nationally bestselling Winter in Paradise trilogy by
Elin Hilderbrand, “Queen of the Summer Novel” (People).

After uprooting her life in the States, Irene Steele has just settled
in at the villa on St. John where her husband Russ had been living a
double life. But a visit from the FBI shakes her foundations, and Irene
once again learns just how little she knew about the man she loved.

With help from their friends, Irene and her sons set up their lives
while evidence mounts that the helicopter crash that killed Russ may not
have been an accident. Meanwhile, the island watches this drama unfold
— including the driver of a Jeep with tinted windows who seems to be
shadowing the Steele family.

As a storm gathers strength in the
Atlantic, surprises are in store for the Steeles: help from a mysterious
source, and a new beginning in the paradise that has become their home.
At last all will be revealed about the secrets and lies that brought
Irene and her sons to St. John — and the truth that transformed them
all.

My thoughts: This is the third and final book in Elin Hilderbrand’s Paradise series and while I am sad to see it come to an end, I thought it was a good finish to what was an overall great winter series.

While we do get closure on what has really driven this series – what really happened to Russ and Rosie, for me that part of the book seemed a bit rushed and the FBI part of the storyline just seemed to fall flat. I guess since that was introduced, I had hoped for a bit more on that angle.

However, where the book really did shine was with all the other characters. And this is where Elin Hilderbrand always does so well. I loved the new relationships that developed out of this tragedy and I loved seeing how they didn’t just happen overnight, but rather each had their own growing pains that we saw develop over the course of this series. To me, that is always the best part of reading series and even in this final book, we still see conflicts arise so that you aren’t too sure where things are heading. I grew to love these characters and will miss being able to catch up with them again.

A great surprise, though, if you happen to be a super EH fan, was the appearance of a character at the end of the book. I love when writers do that and I’m not going to spoil it by indicating who I’m talking about, but if you have read all of EH’s books to date, you will know who I am talking about, and if you haven’t – why haven’t you?

All in all, I enjoyed this series and I would not hesitate to recommend it to anyone looking for some good beach reads, though it really can be read at anytime! But, you MUST read the books in order!!!

Audio thoughts: I was so happy to see that Erin Bennett was once again narrating this book. I listened to all three of the books in this series and picking this last one up was like reuniting with long lost friends. Erin is so consistent with the voices she brings to the characters and she really gets the nuances of Elin Hilderbrand’s characters. I totally binge-listened to this book – not only because I needed answers, but because I was so wrapped up in the world that both Elin and Erin created.