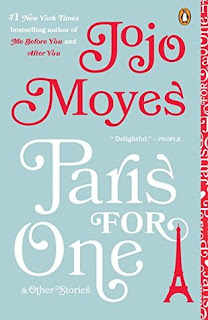 Summary:
Nell is twenty-six and
has never been to Paris. She’s never even been on a romantic weekend
away–to anywhere–before. Traveling abroad isn’t really her thing. But
when Nell’s boyfriend fails to show up for their mini-vacation, she has
the opportunity to prove everyone–including herself–wrong. Alone in
Paris, Nell finds a version of herself she never knew existed:
independent and intrepid. Could this turn out to be the most adventurous
weekend of her life? Funny, charming, and irresistible, Paris for One is quintessential Jojo Moyes–as are the other stories that round out the collection.

***Short & Sweet Reviews are
short, quick reviews. These will mainly be used for series books where I
have already done full reviews on some of the earlier books or for
books that I feel will suffice with a quick review. These will not be
used for review requests or blog tours.

My thoughts: I’m such a fan of Jojo Moyes and even though I don’t tend to read a lot of short stories, I had to pick this one up. I enjoyed all these stories, though I admit, I liked some of them more than others. I actually liked the other ones more than the main one, which happened to be the longest one, but still would recommend picking this book up if you like Jojo Moyes writing and signature wit, you will be in for a treat. They all deal with troubled relationships and are entertaining if not a bit far-fatched, but overall, it’s a good way to spend a few hours.