Emily Carpenter is one of my favorite authors  – ever since discovering her debut novel, Burying the Honeysuckle Girls, I have fallen in love with her Southern Gothic novels.  Her latest book, Reviving the Hawthorne Sisters, is published today. Earlier today I shared my review of the book – you can read that here.
Today I have a conversation that Emily has prepared that I found to be
quite interesting.  Do let me know if you’ll be picking up this book – I’d love to discuss it with you.

In Conversation with EMILY CARPENTER

This is your fifth novel, and continues a storyline from your bestselling first novel, BURYING THE HONEYSUCKLE GIRLS. For readers who are new to your work, what should we know about your first before we dive in?

Honeysuckle Girls is the story of a family whose generations of women all disappeared or died on their 30th birthdays. Without giving spoilers, there’s another woman, Dove, who was a traveling faith healer in the 1930s, who might know something about their tragedies. REVIVING THE HAWTHORNE SISTERS is Dove and her granddaughter Eve’s story.

Where did you find inspiration for this story? What was your first “a ha!” moment?

I had just finished my fourth book UNTIL THE DAY I DIE, which was an adventure-thriller, and I was feeling the need to get back to my Southern gothic, family focused work. I decided to write a sequel or follow up to my first book because there was still so much I wanted to explore with those characters. But I toyed with some ideas but it was when an author friend of mine said to me that this story was really about Dove, that it all came together.

Bill Sunday, the tent evangelist, was a true celebrity of his day. And John G. Lake, who made the claims about the bullet being removed by prayer. Other than that, everything is fiction.

Both Eve and Dove share psychic ability – which they both experience through an electric sensation in their similarly injured arms. What drew you to this theme?

I wanted to keep it subtle and also debatable. Like, do they REALLY know things and have healing power or is it just intuition or coincidence? That whole area of parapsychology and spiritualism is so unexplored. But I did like the idea of them being connected through something very tangible, like the injured arm. To me, it just sort of adds to the mystery at least in Eve’s mind about — “Was my grandmother’s gift real?”

Do you yourself believe in the possibility that certain people are psychic?

Some days I’m a true believer and some days I’m a complete cynic. I can’t seem to fully make up my mind. I wish for it to be true, I guess I’ll leave it at that.

You have two parallel storylines – the past and the present. Did you go back and forth while writing, or write each one individually then weave them together?

I alternated between past and present because I really wanted to experience the unfolding of the book like the reader would. I just kept asking “what would I want to know next?” as if I was the reader. I did have to add one or two extra chapters from the past to make it all fit together narratively. It’s not always a perfectly smooth process.

The hawthorn tree features prominently in your novel. Why did you choose this tree in particular?

I love the superstition that surrounds hawthorn trees, from so many different sources. In Celtic mythology it’s a sacred tree that symbolizes love and protection. It’s also known as a fairy tree! They can get really old. The berries can be made into jam and other parts used in herbal remedies, but I also read that some people believe if you bring the blooms inside it’s bad luck.

The location of your story almost seems like it’s its own character. Are these places you’ve visited, lived, grew up in? If not, how do you research or learn about a place in order to capture its essence for your books?

I’m from Alabama so yes. These are my stomping grounds. Florence though, I had not visited until I was writing the book. I spent several days up there and then I did some reading and spent some time in the library. The internet is a huge help, but for my money, nothing can replace boots on the ground in a place.

Do you have a personal relationship with religion? Did that influence this story?

I was raised in a very religious home, in the Presbyterian church, and in the Bible Belt, so religion, at least Christianity, is also my stomping grounds. I’ve tried out almost all of the Protestant denominations and now I’m a sort of church-abstainer and the things I believe are down to like one or two basics. The older I get, the less sure I get. But I have a lot of experience and opinions about the church and the power and influence it wields for good and bad over people and culture.

Describe Southern Gothic fiction for those readers who are new to the genre.

It riffs on gothic literature which always involves a spooky atmosphere with a heroine in danger, a creepy, decrepit castle, a villain, and maybe a ghost or two. Southern gothic brings in the idea of a fallen, broken South, paying for the sins of its past and it often includes elements of madness and illness and broken people. My favorite quote about what Southern gothic is comes from Jamie Kornegay:

“So what is Southern Gothic? It’s not just Southern vampires and trailer park mayhem. These are sophisticated stories shrouded in darkness and mystery, set in an old mannered South that has soured. The mansions are gray, and there’s something not right about the residents. There may be magic and illusion. There is death, most certainly, and bad behavior committed by the righteous. There is God and the Devil, standing in the muddy, snake-swarmed baptismal river, holding hands.”

Supernatural elements are a feature of Southern Gothic literature – was it important to you to honor this tradition?

I’d say it’s more just my preference. I love stories that include either straight-up supernatural or magical realism elements. But also I love that old gothic trope The Supernatural Explained. Which is basically the plot of every episode of Scooby Doo.

How is contemporary Southern fiction different from a century ago?

Well, all fiction written now is so different from that written in the 1920s. I mean the structure and language alone, because we have all these miniscule attention spans now and books have to compete with movies and TV and YouTube to capture peoples’ attention. I think the change is to be expected but it does change what a book has to be and do. A lot of the classic Southern fiction I think felt extremely progressive to people at the time, but now feels really dated in terms of attitude about race, class, institutional racism. And it was always centered on white people. I think one of the main differences now is we’re hearing from other voices and hearing their experience.

Several of the characters are faced with mental health challenges, from panic disorders to alcoholism. Is there a message you hope readers will take away about this issue?

I hope people see that we all have some challenge to deal with, but that doesn’t take us out of the game. We can support and love and accept one another, no matter what. I love a flawed character – it’s inspiring to know you don’t have to to a superhero to matter to someone.

How did you discover that writing the suspense/thriller genre was where you wanted to play?

My first book was a romcom, a lighthearted women’s fiction type book which, back when I was writing it, wasn’t all that popular a genre. (Also, possibly, it wasn’t that funny either, I’m just putting that out there.) After shopping it around and getting a lot of rejections, I decided to try something totally different. I realized that as a reader and TV viewer, I loved mysteries and really dark stories more than anything else, so – even though I was incredibly intimidated to write a story like that, with clues and twists and all that – I decided to give it a go. I wrote BURYING THE HONEYSUCKLE GIRLS, which turned out to be my debut novel.

The way you describe the murders of Preacher Singley are subtle, somber and quick – almost like they’re implied rather than shown. What was the intention behind that?

I like a long lens with scenes of violence. I think pulling back a bit allows the reader a different perspective and sometimes makes it scarier. If I was writing horror (which I’ve dabbled in) I would stay in close-up and describe every detail. For this book, I felt like cutting away from the gruesomeness was a little more poignant and effective. The threat is still there even though you don’t see all the blood and guts.

The reader will naturally want to play detective and the author will share valuable clues along the journey. Do you want the reader to arrive at the big reveal at the same time as the protagonist, or are you hoping they’ll be one step ahead of the game?

I’d love to surprise readers every time, but they are so smart, I think it’s an impossible task. Mostly I just want them to be surprised about how the conclusion is reached, how it all unfolds in the end. That gives me a lot of satisfaction, when a reader says they didn’t know what was going to happen next.

Are you working on another novel?

I’m working on  several different projects right now. A Southern gothic suspense about three women who are connected to a particular abandoned house in the center of downtown Birmingham, Alabama. And another that’s a bit paranormal and magical. Not sure what I’m going to do with that one just yet, but it’s been a lot of fun to write. 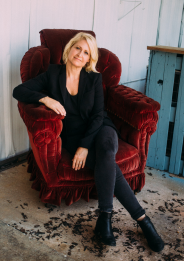 About the author: Raised in Birmingham, Alabama, Emily Carpenter is the bestselling author of Burying the Honeysuckle Girls, Every Single Secret, The Weight of Lies, and Until The Day I Die.
Her books have sold over 290k copies worldwide. Emily began her career
working as an actor, screenwriter, producer and behind-the-scenes soap
opera assistant before becoming an author. Emily holds a BA in
Communications from Auburn University.

***
Thank you Sabrina Dax, publicist,
for sharing this conversation with Emily; and Emily, thank you for
taking
time to answer all these questions – they were so insightful!!! I really
enjoyed your book and can’t wait til the next one comes out! 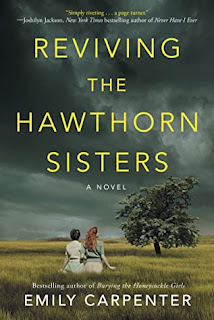