Today, I’m so happy to be a tour stop on the blog tour for The Mirror Man by Jane Gilmartin – I have an excerpt for you to read thanks to MIRA. 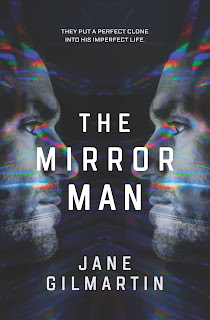 Summary:
Meet Jeremiah Adams. There are two of him.

The
offer is too tempting: be part of a scientific breakthrough, step out
of his life for a year, and be paid hugely for it. When ViGen
Pharmaceuticals asks Jeremiah to be part of an illegal cloning
experiment, he sees it as a break from an existence he feels
disconnected from. No one will know he’s been replaced—not the son who
ignores him, not his increasingly distant wife—since a revolutionary
drug called Meld can transfer his consciousness and memories to his
copy.

From a luxurious apartment, he watches the clone navigate
his day-to-day life. But soon Jeremiah discovers that examining himself
from an outsider’s perspective isn’t what he thought it would be, and he
watches in horror as “his” life spirals out of control. ViGen needs the
experiment to succeed—they won’t call it off, and are prepared to
remove any obstacle. With his family in danger, Jeremiah needs to
finally find the courage to face himself head-on. 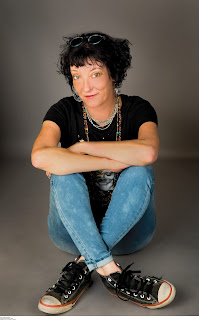 About the author: Jane Gilmartin has been a news reporter and editor for several small-town weekly papers and enjoyed a brief but exciting stint as a rock music journalist. A bucket list review just before she turned 50 set her on the path to fiction writing. Also checked off that list: an accidental singing career, attending a Star Trek convention, and getting a hug from David Bowie. She lives in her hometown of Hingham, Massachusetts.

Charles Scott glared down at him with a glint in his green eyes that felt like a warning, and Jeremiah replayed in his head the man’s ambiguous threat during their first meeting several weeks before.

“You now know as much about this project as anyone else involved,” he’d said. “It wouldn’t do to have too many people walking around with this kind of information. Our investors have a tendency to get nervous.”

Although Scott had quickly followed that remark with the matter of Jeremiah’s substantial compensation, there was no mistaking the implication: the moment he’d been told about the cloning project Jeremiah was already in. That first meeting hadn’t been an invitation so much as an orientation, and the contract he’d later signed had been a formality, at best. And the entire thing had done nothing but gain momentum from that moment on.

Dr. Pike continued to affix the wires to Jeremiah’s head. Jeremiah focused on the man’s gleaming black hair and the deep brown of his sure, professional hands, and he struggled to remember the allure of the $10 million payout he’d get at the end of the whole thing. That kind of money could fix a lot of problems. It would change things. The prospect of that fortune had been enough to to make him turn away from principles he thought were unshakable. Every man has his price, he supposed.

Somewhere in the back of his mind he also acknowledged the real temptation of a twelve-month sabbatical from his own life. It had seduced him every bit as much as the money had. Maybe more. Between a job that had already begun to make him question his own morals, and a marriage that felt increasingly more like a lie, stress was eating him alive. And into his lap fell a chance to just walk away from all of it — without consequence and without blame. A free pass. He could simply walk away without anyone even knowing he was gone. There isn’t a man alive, he told himself, who would have refused. Despite the ethical question, despite that human cloning was illegal the world over, it would have tempted anyone.

Dr. Pike injected the clone with Meld and then turned wordlessly to Jeremiah with the second syringe poised above his left shoulder.

Jeremiah closed his eyes and rolled up his sleeve.

After the initial stab of the needle, he felt nothing. Which is not to say he didn’t feel anything; he literally felt nothing. Seconds after the injection, he became aware of a total emptiness, like a towering black wave that threatened to sink him into an immeasurable void. The experience was unlike anything he’d ever known. He imagined an astronaut suddenly untethered from his ship, floating helplessly into unending darkness. Without thinking, he immediately felt his body recoil. His mind screamed against it.

From impossibly fare away, he head Dr. Pike say something about a heart rate and felt the slight pressure of a hand on his shoulder. He couldn’t see anything of the hospital room anymore. He was drowning in the blackness. His chest felt suddenly constricted. He fought just to find his breath.

“This is all perfectly normal, Mr. Adams. You have nothing to worry about. Concentrate on the sound of my voice. Nod if you hear me.”

With considerable effort, Jeremiah managed what he hoped was a nod of his head. He was suddenly gripped by the alarming certainty that if he couldn’t communicate somehow, he’d be lost — swept away forever.

“Good. Good. Listen to my voice. It will keep you grounded.” Pike still sounded far away, but Jeremiah nodded again and struggled to focus. “What you are experiencing is to be expected. Do you remember when you took the Meld with Dr. Young? Do you remember the way you could feel her thoughts for the first few minutes?”

He nodded. It had been an unnerving thing to perceive her consciousness mixing with his like that. Flashes from her mind — odd, alien things like the feel of a blister on the back of her right heel, the familiar gleam in the eye of an old man he’d never seen — had swirled into the very structure of his own mind and fought for a place to settle. He had railed against that, too, and she had grounded him by flashing a penlight in his face, making him focus on that while the Meld took effect. Afterward, once he had sunk in, it had been easier.

“This is no different than what you experienced then.” Pike said. “This time, though, you are connected to an empty mind. There’s nothing there. But the more you resist, the longer this will take. You need to relax, Mr. Adams. Give in to it.”

Jeremiah nodded again and then shook his head with as much grit as he could muster. How does one give in to this? He didn’t think he could do it.

“Once your thoughts begin transferring into the mind of the clone it will be easier for you,” Pike urged. “Focus on a memory, as I suggested. Something vivid. It will help to fill that void you’re experiencing now. It will give you something to hang on to.”

Without the benefit of his full faculties, Jeremiah had little choice but to grab that last thing he’d been thinking about — his initial conversation with Charles Scott, the day all of this began.

He’d been surprised when he’d received an invitation to lunch from ViMed’s head of Engineering. The man was an icon in the science world, and although he’d quoted him a hundred times for the company, Jeremiah had never actually met him. He’d been intrigued enough to accept the invitation, especially when Scott had told him it involved a “proposition that could make him a very wealthy man.”

Flashes of that encounter and snatches of conversation now flitted through his mind like so many fireflies. He fought to catch them.

“We’ve been watching you, Mr. Adams.”

“We can do this. The science exists. And with Meld, the clone will even share your thought patterns… Your own mother won’t know the difference.:

“This is sanctioned by powerful people — we have millions in secret federal backing. There are billions more in eventual funding… There’s no needd to be so suspicious, Mr. Adams.”

From somewhere far away, Jeremiah heard Dr. Pike repeating his name. He had been so engulfed in his efforts to hold on to the memory that he’d almost forgotten where he was. As soon as he realized it, the void loomed again in his mind.

“Mr. Adams,” Pike said, “you’ve got to listen to me. The clone cannot pick up on any memory of the experiment. What you’re thinking about is not going to help. You need to thinka bout something else, some memory that won’t be filtered. His mind is still empty.”

Jeremiah panicked. He couldn’t think. And now that he wasn’t focused on anything, the blackness began to take over again, creeping closer and threatening to swallow him. He fought for breath.

“Relax, Mr. Adams,” Pike said. “Think about your job here at ViMed. Remember something the clone can actually use. Something he’ll need to know.”

He felt a dull jab at his shoulder.

“This should help. I’ve given you a mild sedative. Take a few deep breaths. Concentrate on your breathing.”

With everything in him, Jeremiah tried to turn his mind away from the void that seemed to be all around him. He inhaled deeply and tried to focus on the rise of his own chest. Exhaled, and he felt his chest fall.

Inhale. Exhale. After a moment, Jeremiah began to relax and, as the sedative took hold, he found he could let his mind wander without the frantic thought that he’d never get it back. An oddly comforting fog seemed to expand in fornt of him, pushing the blackness away slightly, and Jeremiah retreated into it.

He began to think about the morning of the Meld fiasco — the day the New Jersey housewife had killed herself. The press had been circling. He’d arrived at his office with a terse mandate from his superiors to “get these f*ckers off our back” and no idea how to accomplish that. It hadn’t been lost on him that not a single soul seemed bothered enough to stop and feel sorry about it, and he’d taken a quick moment behind his office door to offer silent condolences. It wasn’t thirty seconds before someone had come knocking, pushing him to get something done.

Weeks before, he’d heard talk of Meld being used to detect brain activity in a sixteen-year-old football player who had been comatose for nearly six months. Time to cash in. He tracked down the doctor somewhere in Delaware and the man started gushing about Meld, calling it “magical,” “a godsend” and “the most important medical advance of a generation.”

“After so many weeks,” he said, “the parents were hopeless.”

Meld was a last result before pulling the plug, and it gave them the first clear signs of neural activity in the boy.

“Not only was he aware and awake in there, but he was cognizant of everything that was going on around him — including the fact that his parents were losing hope. He even heard them talking about funeral arrangements at one point. The kid was scared, terrified. He was begging for his life in there. That’s what I saw when I took the Meld with him. Meld absolutely saved his life. There is no doubt in my mind.”

Jeremiah had almost smiled. It was pure gold. A few hours later, the story was in the hands of every major news outlet, and that doctor was spending his fifteen minutes of fame touting Meld as “a medical miracle.”

Jeremiah focused on that now. Maybe Meld did have some silver lining, after all, he thought. Maybe it was miraculous.

Hope I’ve enticed you to pick this book up with this excerpt…that it gives you a flavor of the book.