Last year, I read The Chelsea Girls by Fiona Davis when it was first released in hardcover, and I really enjoyed it! You can read my thoughts on the book here.


Today
the book is being released in paperback – with a brand new cover!!! –  and to celebrate, I am helping
the publishers get the word out. I’ve read every book Fiona Davis has written and have loved them all – she really has a knack for bringing iconic New York City buildings to life. 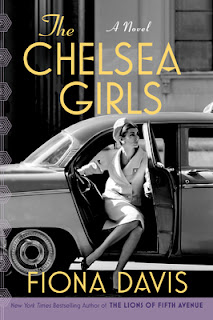 Summary:
The bright lights of
the theater district, the glamour and danger of 1950s New York, and the
wild scene at the iconic Chelsea Hotel come together in a dazzling new
novel about a twenty-year friendship that will irrevocably change two
women’s lives–from the national bestselling author of The Dollhouse and The Address.

From
the dramatic redbrick facade to the sweeping staircase dripping with
art, the Chelsea Hotel has long been New York City’s creative oasis for
the many artists, writers, musicians, actors, filmmakers, and poets who
have called it home–a scene playwright Hazel Riley and actress Maxine
Mead are determined to use to their advantage. Yet they soon discover
that the greatest obstacle to putting up a show on Broadway has nothing
to do with their art, and everything to do with politics. A Red Scare is
sweeping across America, and Senator Joseph McCarthy has started a
witch hunt for communists, with those in the entertainment industry in
the crosshairs. As the pressure builds to name names, it is more than
Hazel and Maxine’s Broadway dreams that may suffer as they grapple with
the terrible consequences, but also their livelihood, their friendship,
and even their freedom.

Spanning from the 1940s to the 1960s, The Chelsea Girls
deftly pulls back the curtain on the desperate political pressures of
McCarthyism, the complicated bonds of female friendship, and the siren
call of the uninhibited Chelsea Hotel.

Praise for The Chelsea Girls:

“Davis
tells a very good story and deserves all the praise she won for her
other books set in famous New York landmarks… a tale that is
intricate and subtle, unpredictable and exciting.” —The Washington Post

“Davis,
who has given juicy supporting roles to New York landmarks in The
Masterpiece and The
Address, uses Chelsea
as a metaphor for the grandeur that was within reach but spirals into a much darker place.”
—Associated Press

“Another
spectacular novel… Davis needs to be celebrated for this. Sure, she
gets the history right and does a magnificent job of bringing the
Chelsea’s special magic to life. Beyond that, she is an exquisite
writer, who captures the essence of people and times.”
—The
Star-Ledger (Newark,
NJ)

“The
glitz and glamour of the Chelsea Hotel provides a perfect backdrop for
Davis’s story of friendship, ambition, and behind-the-scenes theatrical
intrigue… both a sharp-eyed commentary on female friendship and a vivid
glimpse into the life of a New York City
icon.” —Shelf
Awareness (starred
review)

“A
fascinating and wholly immersive celebration of friendship, love,
loyalty, and courage during a turbulent and often underrepresented
period in American history… Richly detailed and transporting, historical
fiction fans will love this one!”
—Chanel
Cleeton, New
York Times bestselling
author of When
We Left Cuba