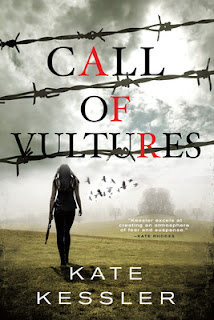 Summary:
In this suspenseful
and twisted thriller, an ex-con uses her unique skill set to fight for
the justice of those who can’t defend themselves. Kate Kessler’s novels
are “impossible to put down” (Hollie Overton).


Killian Delaney has a skewed moral compass, a high threshold for
pain, an unstoppable will, and she’s just joined the Network: a group
of well-funded individuals who help the weakest among us.

Two sisters have gone missing, and Killian has been hired to track them down.

The plan is straightforward: follow the trail, find the girls, and kill whoever stands in her way.

They’re
living in a commune in upstate New York, one that looks a lot like a
cult. And while one sister wants out, the other adamantly refuses.

Breaking them free will push every skill in Killian’s arsenal to its limit. But she’s determined to get them home.

My thoughts: This is the second book in Kate Kessler’s Killian Delaney series and boy was it just as intense and twisted as the previous one. Having just read Seven Crows, I was quite eager to jump right in to this one and it did not disappoint.

While this book can be read as a stand-alone, I highly recommend reading Seven Crows first. It really sets this one up, giving you a much fuller understanding of who Killian Delaney is and why she is the way she is. Plus, you will have a better understanding of some of the other relationships she has with the other secondary characters. That’s not to say that you will be totally lost should you not read Seven Crows as Kate Kessler does provide some backstory, but it’s just bare bones.

In this latest installment, Killian is asked to go after two sisters who have found themselves involved with can only be described as a cultish group. Little does she know that she has not been given the full story and as she digs deeper into the situation, she uncovers more than she bargained for.

I love Killian – she is one tough, kick-a** character who is fiercely loyal to those she loves yet she is a deeply flawed character. This story was so full of twists and suspense and I could not turn the pages fast enough, trying to figure out what was going on. It kept me engaged from start to finish and I loved how this one played out.