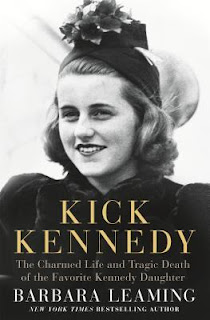 Summary:
Kathleen “Kick” Kennedy
was the incandescent life-force of the Kennedy family. The daughter of
the American ambassador to the Court of St. James’s, Kick swept into
Britain’s aristocracy like a fresh wind on a sweltering summer day. Kick
was the girl whom all the boys fell in love with, the girl who remained
painfully out of reach for most of them.

To Kick, everything
about this life was fun and amusing—until suddenly it was not. For this
is also a story of how a girl like Kick, a girl who seemed made for
happiness, confronted crushing sadness. Willing to pay the price for
choosing the love she wanted, she would have to face the consequences of
forsaking much that was dear to her.

Bestselling and
award-winning biographer Barbara Leaming draws on her unique access to
firsthand accounts, extensive conversations with many of the key
players, and previously-unseen sources to transport us to a world of
immense wealth, arcane rituals and rules, glamour and tragedy that has
now disappeared forever. This is the coming-of-age story of the female
star of the Kennedy family, and ultimately a tragic, romantic story that
will break your heart.

My thoughts: As I make my way through the many Kennedy books I have, what I appreciated about this one is that it really focused in on Kick’s life and not the entire Kennedy clan. It’s a coming-of-age story that doesn’t start at her birth, but rather when Kick was already over in England. I think this is where Kick really comes into herself and I loved that the author decided to start the story there. Of course, I knew going into this book that this story does not have a happy ending and so part of me was just waiting for that horrible event and I think it’s handled quite well.

Kick Kennedy was a complex person. She was full of life and lived that life based on her passions and her beliefs. She didn’t let anything or anyone stop her from doing what she wanted, even if it meant going against her own parents’ wishes. Of course, this had some pretty tough ramifications, but she went through with it anyway.

Reading this book, it’s hard not to wonder what if. What if she hadn’t died so young? She was a bright young mind that met a tragic ending way too soon. Who knows what would have happened had she not gotten on that plane that fateful day…


Audio thoughts: This was a great audio – I was engaged the entire time and found myself listening to this book in one day. I found Kick’s story to be so fascinating and the narrator did a fantastic job narrating it. I find it easier to listen to nonfiction but I love having the book on hand to refer to if need be.