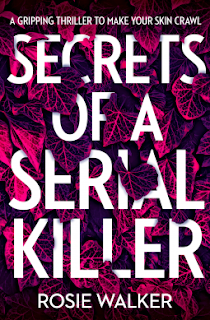 Summary:
An edge-of-your-seat serial killer thriller that you won’t be able to put down!
There it is: fear. It’s crawling all over her face and in her eyes, like a swarm of insects, and it’s all because of him.

A
serial killer has been terrorising Lancaster for decades, longer than
should ever have been possible. The police are baffled, eluded at every
turn by the killer whose victims span generations. Speculation is rife
among the true crime forums; is someone passing on their gruesome trade?

Every
local mother’s worst nightmare has become Helen Summerton’s reality;
he’s taken her daughter, Zoe. As the clock runs down so do her chances
of survival. Can Helen unearth the secrets of the killer before it’s too
late?

A gripping serial killer thriller that you won’t be able
to put down. Perfect for fans of The Whisper Man, What You Did and Don’t
Even Breathe.

My thoughts: I don’t know what it says about me but as soon as I saw the title of this book, I had to read it. I love books about serial killers…there’s something so addicting and thrilling about them, however dark and disturbing they tend to be. And when you add in a mental hospital, it just amps up the tension and suspense.

Overall, I liked this book. I will say, it did get a little hard to follow at times with so many different threads, but it all came together at the end. It’s definitely dark and creepy, and completely atmospheric, which I totally loved. At times, I did feel that the pacing did drag a bit, but with the multiple points of view telling the story, I think that might have contributed to that. But, I really wanted to find out what happened next, so I kept reading, which is always a good sign!

This is Rosie Walker’s debut novel and I enjoyed her writing. I will for sure be eager to see what she writes next.