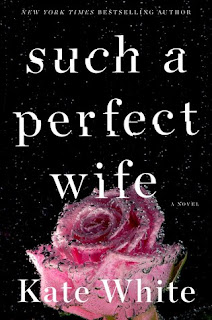 Summary:
Must be blonde, beautiful, and a good Catholic girl…

On
a sunny morning in late September, Shannon Blaine, a blonde, green-eyed
34-year old wife and mother of two, sets off on a jog along the rural
roads near her home in Lake George, New York.  It’s her usual a.m.
routine, her “me time” after dropping the kids off at school…except on
this day she never returns. The residents in the idyllic lakeside
town—which is popular with summer tourists—are stunned. Would Shannon
have just taken off, overwhelmed with the pressures of being the perfect
wife and mother? Did a stranger snatch her? Or could her husband be
responsible for her disappearance?

The hot new online magazine Crime Beat wants
to cover the case and they hand the assignment to noted true crime
writer Bailey Weggins. It doesn’t take long for Bailey to see that the
story has far more facets than she initially realized:  a bitter
sister, an unfaithful brother-in-law, an evasive deacon, and a creepy
motel owner who watched Shannon run every morning. When an anonymous
caller reaches out to Bailey and gives her the cryptic clue that Shannon
was a “good Catholic girl,” the tip eventually leads Bailey to the
grisly discovery of Shannon’s body. And suddenly, based on what else
Bailey finds, everything about the case shifts, suggesting that
Shannon’s murder isn’t an isolated incident but rather the work of a
serial killer with a very specific calling card. Bailey sets out to
expose the killer before another woman has to die, including herself.

My thoughts: I am a big fan of Kate White’s Bailey Weggins series and love that she continues to write this series, even if there are big gaps in-between books. This is a series that you really can just pick up a book here and there and not really need to have read the prior books – which coming from me, where I usually feel it’s crucial to read the books in order, sounds weird, but in this case it’s ok.

It’s always good to reunite with Bailey and I love how determined she is. She isn’t about to just write about a missing woman, she makes it her mission to find out what really happened to her. She gets friendly with the local reporter and the two start working together to solve the mystery. But they uncover a whole lot more than they bargained for.

I always find that these books really keep me guessing all the way through and this one was no exception. The twists and turns keep you on your toes and I loved the way the author used a popular tourist town in the off -season to make it seem so isolated and remote. This helped to build a sense of tension and suspense and added to that was the fact that everyone that Bailey and Alice, the reporter she was working with, met up with seemed to have something to say about the missing woman.

This book moves at just the right pace and while I had my suspicions, I did not figure it all out. I love the way Kate White writes and I sure hope we have another Bailey Weggins book soon…these books are just so fun!