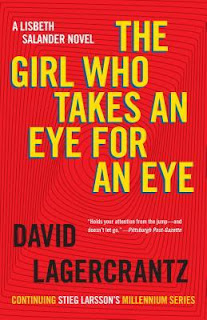 Summary:
From the author of the #1 international best seller The Girl in the Spider’s Web: the new book in the Millennium series, which began with Stieg Larsson’s The Girl with the Dragon Tattoo

Lisbeth
Salander – the girl with the dragon tattoo, the brilliant hacker, the
obstinate outsider, the volatile seeker of justice for herself and
others – has never been able to uncover the most telling facts of her
traumatic childhood, the secrets that might finally, fully explain her
to herself. Now, when she sees a chance to uncover them once and for
all, she enlists the help of Mikael Blomkvist, the editor of the
muckraking, investigative journal Millennium. And nothing will
stop her – not the anti-Muslim gang she enrages by rescuing a young
woman from their brutality; not the deadly reach from inside the Russian
mafia of her long-lost twin sister, Camilla; and not the people who
will do anything to keep buried knowledge of a sinister
pseudo-scientific experiment known only as The Registry. Once again,
Lisbeth Salander and Mikael Blomkvist, together, are the fierce heart of
a thrilling full-tilt novel that takes on some of the most insidious
problems facing the world at this very moment.

My thoughts:  As I was getting ready to finally pick up the last book of this series, I realized I had never written my review of this book, book 5. Luckily I had written some notes, so it actually worked to my benefit to have to write this now, because it gives me a little refresher on where we left things with Lisbeth and Mikael before heading into the final book of this amazing series.

I love this series. I am so glad that I decided to continue on despite the change in author. Yes, I was devastated when Stieg Larsson died and I do think things would have been different had he been able to continue on with the series, but unfortunately that is not the case here. I think David Lagercrantz has done a great job with the two books he has written so far, really coming into his own in this latest one and I can’t wait to see how he handles the final book.

This book picks up a few months after the previous book. I highly recommend reading this series in order as so much of what happens really hinges on what has come before. Yes, the author does a good job filling the reader in with a bit of backstory, but to really get the full picture and understand all the is going on, I think you would be better off reading the series from the start. But that’s just my opinion.

The book starts out with Lisbeth serving her sentence in jail where she meets a young Pakastani girl who is being targeted by the jail bully. Lisbeth being Lisbeth not only takes care of the bully, but gets her lawyer to look into the Pakastani girl’s case.

The other part of the story revolves around the case of identical twin brothers. I have to say, this was a disturbing story line – the experimental twin studies that had been happening. But, this is where we delve into Lisbeth’s past and her history as a twin and I found this so fascinating. I have wanted to know more about her and why she is the way she is since the start of this series and I am so glad we have finally gotten some of those answers.

This was such a great installment and I am looking forward to the next installment…I can’t wait to see how it all wraps up – but at the same time I am a little sad that it will be the final book!

1.  The Girl With the Dragon Tattoo

5. The Girl Who Takes an Eye for an Eye

6. The Girl Who Lived Twice