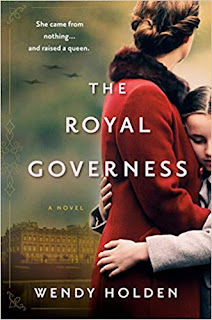 Summary:
Sunday Times bestselling
author Wendy Holden brings to life the unknown childhood years of one
of the world’s most iconic figures, Queen Elizabeth II, and reveals the
little-known governess who made Britain’s queen into the monarch we know
today.

In 1933, twenty-two-year-old Marion Crawford accepts the
role of a lifetime, tutoring their Royal Highnesses Elizabeth and
Margaret Rose. Her one stipulation to their parents the Duke and Duchess
of York is that she bring some doses of normalcy into the sheltered and
privileged lives of the two young princesses.

At Buckingham
Palace, Windsor Castle, and Balmoral, Marion defies oppressive court
protocol to take the girls on tube trains, swimming at public baths, and
on joyful Christmas shopping trips at Woolworth’s. From her ringside
seat at the heart of the British monarchy she witnesses the upheaval of
the Abdication and the glamour and drama of the 1937 Coronation.

During
the war, as Hitler’s Heinkels fly over Windsor, she shelters her
charges in the castle dungeons (not far from where the Crown Jewels are
hidden in a biscuit tin). Afterwards, she is there when Elizabeth first
sets eyes on Philip. But being beloved governess and confidante to the
Windsor family has come at a cost. She puts her private life on hold
until released from royal service following Princess Elizabeth’s
marriage in 1947.

In a majestic story of love, sacrifice, and
allegiance, bestselling novelist Holden shines a captivating light into
the years before Queen Elizabeth II took the throne, as immortalized on
the popular television series The Crown.

My thoughts:  As I might have mentioned on here a time or two, I am completely fascinated by the royal monarchy, so when I saw this book, I knew I had to read it. I am obsessed with the Netflix show, The Crown and have been reading as much as I can about anything to do with the royals.

I loved this book. It was full of insightful information and I found it quite easy to get lost in the story. Focusing on the childhood of the current queen, from the perspective of Elizabeth and Margaret’s governess, I feel I learned quite a bit that hasn’t been covered on the show. For instance, I had no idea that Elizabeth had an obsessive compulsion when she was young. I loved that Crawfie, as she is come to be known, was determined to give these girls a sense a normalcy in their world when their life was anything but.

The one thing this book highlights that I’m not sure I really knew is that being close to the royals comes with great sacrifice to one’s own life. This was made quite clear by all the Marion Crawford gave up in her own life, not just in regards to who she could date but also her own private life in general. It was a great honor for sure to work for the royals, but there were drawbacks, too.

This is a highly readable, enjoyable and enlightening read and while there were things I knew, I also picked up some new tidbits about the royals that I hadn’t known before, which I why I love reading historical fiction. Wendy Holden is a new author to me and I do hope she continues to write more historical fiction as I really enjoyed this one.