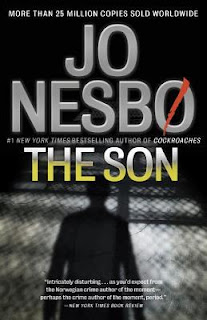 Summary:
The author of the
best-selling Harry Hole series now gives us an electrifying tale of
vengeance set amid Oslo’s brutal hierarchy of corruption.

Sonny Lofthus has been in prison for almost half his life: serving time
for crimes he didn’t commit. In exchange, he gets an uninterrupted
supply of heroin—and a stream of fellow prisoners seeking out his
Buddha-like absolution. Years earlier Sonny’s father, a corrupt cop,
took his own life rather than face exposure. Now Sonny is the center of a
vortex of corruption: prison staff, police, lawyers, a desperate
priest—all of them focused on keeping him stoned and jailed. When Sonny
discovers a shocking truth about his father’s suicide, he makes a
brilliant escape and begins hunting down the people responsible for his
and his father’s demise. But he’s also being hunted, and by enemies too
many to count. Two questions remain: who will get to him first, and what
will he do when he’s cornered?

My thoughts: I picked this book up as part of a bookclub pick and I am so glad I did. It’s not my first Jo Nesbo book, as I have started his Harry Hole series, though I haven’t gotten very far in that series. This is, though, my first of his stand-alones and I enjoyed it very much.


I love a book where no character is what you initially think they are and that is exactly what you find here. All the characters were so well-developed and no one was just good or just bad. The characters are all flawed which just makes them that much more intriguing. I was immediately drawn in to what was going on and while this is definitely not a book to fly though, I found myself completely engaged all the way through.


I loved that way the story all came together in the end. There were some interesting twists that I definitely did not see coming and I loved how it all played out. This really makes me want to read more of Jo Nesbo’s books and I have a feeling I might want to reread this one at some point as well. Have you read any of his books – stand-alones or his Harry Hole series?