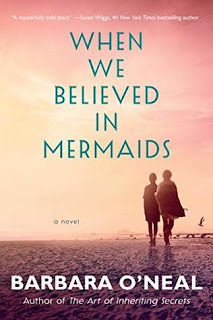 From the author of The Art of Inheriting Secrets comes an emotional new tale of two sisters, an ocean of lies, and a search for the truth.

Josie Bianci was killed years ago on a train during a terrorist
attack. Gone forever. It’s what her sister, Kit, an ER doctor in Santa
Cruz, has always believed. Yet all it takes is a few heart-wrenching
seconds to upend Kit’s world. Live coverage of a club fire in Auckland
has captured the image of a woman stumbling through the smoke and
debris. Her resemblance to Josie is unbelievable. And unmistakable. With
it comes a flood of emotions—grief, loss, and anger—that Kit finally
has a chance to put to rest: by finding the sister who’s been living a
lie.

After arriving in New Zealand, Kit begins her journey with
the memories of the past: of days spent on the beach with Josie. Of a
lost teenage boy who’d become part of their family. And of a trauma that
has haunted Kit and Josie their entire lives.

Now, if two sisters
are to reunite, it can only be by unearthing long-buried secrets and
facing a devastating truth that has kept them apart far too long. To
regain their relationship, they may have to lose everything.


My thoughts:  This is the first book I’ve read by Barbara O’Neal. It was a bookclub pick and it was a good one for discussion.

I liked this book…there are definitely some things that I think worked really well and then there are some things that I feel were a little lacking but overall I enjoyed it. I am always a fan of stories involving family drama of anything, and of course, I was drawn to a story that involved a story where a sister is presumed dead only to be seen on television fifteen years later. That immediately drew me in and kept me wondering what would cause someone to walk away from their life.

Both Kit and Josie are complex characters and I loved that we learn more about them through as the story moves back and forth in time. While I didn’t necessarily love both characters, I did this to be a very effective way to give us the necessary backstory that fills in crucial information in both the past and the present.

But, I do feel that there was such a missed opportunity with Josie/Mari and her husband and the mansion that they had acquired. There was that awesome backstory that we are told about the mystery and murder and yet it doesn’t go anywhere. I was a little let down about that.

Overall, it was a good story and we did have a fair bit to discuss at bookclub and isn’t that what a book club pick should be able to elicit?

Audio thoughts: This was just an ok audio. The narrators were less than stellar and I probably would have been better off reading the book than listening to it, but due to time constraints, I went the audio route. The pacing was ok but the voices and accents were a little off.